Global Warming â€“ We Didn’t Cause It

My Dad is a voracious reader.Â  Every afternoon he sits in his chair and reads all kinds of books.Â  It’s a huge benefit for me because I have an endless supply of free second-hand books and I get an intelligent review of the content before I start reading.Â  Sometimes he’s so impressed by a book that he sends out an email telling everyone why we should read it.Â  When he’s really moved by a book, he’ll order it and it will magically appear on my doorstep whether I have any interest in reading it or not. 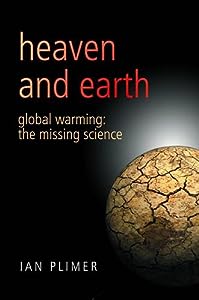 Dad’s most recent book-related email was about Ian Plimer’s book,Â Heaven and Earth. Â It’s a complicated textÂ aboutÂ climate change and global warming.Â  In a nutshell, the planet has been in existence for 4.6 billion years. Â During that time, it’s gone through all types of climate changes.Â  Humans have only been around for the last 200,000 years. Â For the non-math types, that’s only 0.004% of the history of Earth.

This past week I went to a great seminar with Ryan Kretschmer and Chester Klotz, transactional attorneys from Squire Sanders and Dempsey.Â  Â They shared the process of getting approval from the Securities and Exchange Commission (SEC) for a company to make an initial public offering (IPO).Â  One of the questions a company has to answer is its effect on global warming and vice versa.Â  My first thought was, â€œWhat if the company doesn’t buy into the global warming hoopla?â€

A company can have an effect on its surrounding community by creating dust, pollution, and noise, but, according to Plimer, human behavior has little impact on the global environment.Â  Here are some of the highlights from his book:

Apparently, one company said in its application to the SEC that global warming could affect it if the polar ice caps melt enough, the oceans would flood their coastal facilities.

Entire industries have been built around the concept of â€œgoing green.â€Â  If Plimer is right, it’s all a gimmick to get us to spend more on hybrid cars, solar panels, and recycled toilet paper. Â Al Gore won a Nobel Prize for preying on the fears of the impressionable public.

Some would say, not only did Gore win the Nobel Prize based on bad science, but he’s making tons of money with has cap and trade scams. Â Maybe we can stop the wasteful spending to limit CO2 emissions and use the money to give increased economic opportunity to countries that are not as wealthy as the United States.